I launched Tiny Acquisitions on May 31, 2021 on Twitter and I'll share a few lessons that I've learned after one year in operation.

When I started this two-sided marketplace, I honestly couldn't have predicted that I would've committed to the process of growing this for 12 consecutive months. I didn't know how significant this could be but I was willing to try because I had a problem I needed to solve.

This has been the most complicated task I've ever embarked on. There were so many moving parts that needed to be considered simultaneously for this to work that it could've left me completely paralysed and wanting to throw in the towel.

But I didn't and here are the lessons that helped me along the way.

Momentum is the bane of Unpredictability

I've always had relatively predictable outcomes based on the effort I put into things generally in life. In school, I listened in class, I read all the content from cover to cover and weighed the probability that something coming on an exam that I hadn't seen before was relatively low. If that was the case, I could attempt every question and at worst just pass the exam.

So the odds were stacked in favour of me doing well on exams and if so then I'd always do well in life, right?

In the working world, if you showed up to work everyday, met your objectives, and did your best then you were on your way to at least getting a salary that you agreed to every month. At worst, you might not be considered for a promotion every year but that's fine I have a salary every month, right? As long as you put in the work, you could have a good idea at what the outcome would be.

Building a software as a service business comes with uncertainty that make outcomes unpredictable at the very beginning. If I put in 3 months building this, will it be profitable? You don't know if you'll get paying customers, you don't know how much energy to put into this because, suppose it fails? Would I have wasted that time? Am I gonna be able to keep the lights on?

There is so much uncertainty that comes in the early stages of running a SaaS business and that's natural I think. Especially if you are really trying to innovate and create something unique relative to what's already in a particular space.

What I have learned though is that keeping the ball moving forward reduces the focus on uncertainty. It's not that uncertainty ever completely disappears but momentum reveals & clarifies the destination and keeps the operations kinetic.

We then have something to measure based on a hypothesis that we put forward. If you literally pause to rest on the laurels of launch day thinking that everyday is going to look or feel  the same then you are in for a bumpy ride that will be short lived.

Everyday must be as if it were day one. You must keep creating new goals, findings ways to improve the product, increasing the revenue, gaining more of the market and improving the brand.

This is a great way to say what the outcome is going to be if we do this or that.

I think my mind moves  at a 100 miles/hour sometimes and as soon as I get an idea I want it to be executed right away. I find that based on my past experiences it's hard to delegate and let go of things for fear that it will not get done in a timely manner.

Also, there was some success as we ran out of the blocks as a one person operation but I needed help from the start but didn't know it. I think early virality contributed to setting the wrong tone as I developed a not so realistic expectation right after we launched because we literally went viral on Hacker News with 20,000+ unique visitors in a few hours.

Here's the thing though! There were things that needed to get done for us to grow but I didn't have the wherewithal to do them. I can't do a lot of things as well as someone else who has that talent/skill. I don't have all the talents that are there to have. Each person is given only one or a few talents that contributes only a percentage to an intended masterpiece.

No one person is good at everything.

The early traction did bring attention and eventually a team. I had to move away from "this is mine" to "this is ours" and our team members had to feel that this was theirs. We have a team of skilled persons who contribute daily to making the product what it is today.

We had cash investment, skill investment and just more than one mind pondering ideas to make Tiny what it is right now and I know we will continue to improve. Without our combined efforts, it's unlikely that we would be here to celebrate one (1) year of operation.

I am truly proud of the team that we have.

It's vitally important to consistently keep building a community around your product offering. I put quite a few of my thoughts out on twitter just sharing what it's like being a person living in a 3rd world country trying to build products on the internet and that resonated with quite a few persons. When I put what I was working on out there, it got a lot of traction.

This started the ball rolling and provided momentum. Our audience has been the driving force of our operations. That's where our community lives. Engaging the audience provides items for our roadmap, feedback on features launched, bug reports, criticism and gives us the opportunity to also stamp our brand in peoples minds which drives word of mouth marketing.

Yes! Our audience is the life blood of our marketing efforts too. It's that audience that provides the first pieces of data to make assumptions for future campaigns. No software as a service business can be built successfully without identifying the target customer and what their needs are. The audience provides this vital piece of information as well. Having an audience for your product is itself market research.

It also works in giving you a level of gratification when you see someone else promoting your business and recommending your software as a solution to someone else's problem.

The endurance to keep the ball rolling for one more month, one more week, one more day and even one more minute is produced from a grander view. Whenever there is a huge goal that seems possible to reach but takes effort to get there, then there will be a need to keep operations going.

Once $10 MRR is in the bag, there is that possibility of getting to $1oo MRR. If the dream is to eventually get to $100,000 MRR then this creates the potential difference to drive the team to keep going in that direction.

Is this easy? Of course not! But once there is a reason to continue then there is a chance that we will continue. The very second that the big dream begins to fade or seem too far to ever reach, that is the very second that friction will overcome momentum and bring operations to a complete halt.

If you have gotten to this point, thanks for taking the time to read. You can keep up with what we are doing on a daily basis by following me on twitter: https://twitter.com/stepocampbell_ 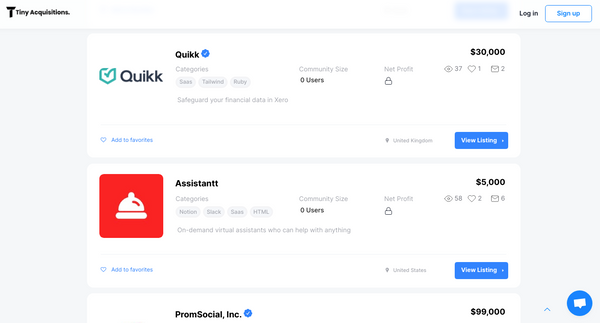 A micro SaaS marketplace is a platform that enables makers/developers of micro saas applications to sell/liquidate the codebase, IP, domain names, resources of these software products.

The best kinds of starter businesses to buy online nowadays are side projects.

A prestigious community of developers collaborating & building projects to sell on Tiny Acquisitions.